Here is what has been on my mind this past week: My Grandma Lil passed away in December at the age of 105–four months shy of her 106th birthday which would have been on April 2.

Grandma saw a lot over the course of her life including two world wars, the Depression, the Korean War, Civil Rights, Vietnam, Afghanistan and 17 US Presidents. From sitting in the wrong section of a train to using ration books, Grandma had stories that paralleled history. On the lighter side, she saw the birth of television, talkies and color films. She also saw the ebb and flow of fashion and design trends. Her beaded and needlepoint handbags with the chain straps and shawls from the 20’s and 30’s are similar to those coveted by collectors and fashionistas today. Grandma knitted sweaters for her three children, seven grandchildren and even a few of her great-grandchildren. I still have a few from my college days.  The stitching and details are far nicer than anything I’ve seen in any boutique. All of us have a little Grandma Lil in our wardrobes as well as sweaters packed away for the next generation.  And hat toilet paper covers that somehow follow us from city to city in. Aside from those covers, most things about Grandma Lil were classic and timeless.

The highlight of my week was having coffee with Grandma. Since distance was a factor as she moved from New York to Maryland at the ripe, young age of 88 and we live in Wisconsin, most of those coffee dates took place over the phone early on Sunday mornings. Our conversations would always start the same. She would ask if I had my coffee and I would tell her the kind of beans I used, to which she would reply, “How is it today?” Coffee time with Grandma was sacred and my friends across the world knew that no calls were placed or received until after my coffee with Grandma.

On many occasions, she would walk down memory lane and tell me about her life in New York and her brownstone in Brooklyn. After opening the Plaster Gallery, I took great interest in the original designs of her home including the plaster. The photo below shows some decorative plaster from that period. 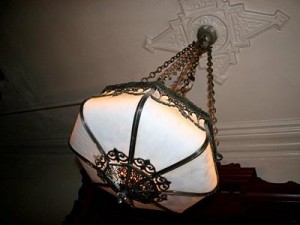 When we would visit and she would ask about “your business” I would show her pictures of our medallions, moldings, and completed projects as well as a print out of our website. She tried to get her head around the concept of a website and could not believe that decorative plaster was back in style. Truthfully, decorative plaster was never really out of style and like everything else there were times when it was widely used and times when it was less prevalent. I like to think she was pleased that we saw the importance of preserving those elements and details.

Unfortunately, my coffee dates became more sporadic three years ago when Grandma found it too difficult to hear on the phone. Coffee with Grandma was limited to my yearly visits to Maryland. I would stop to pick up coffee on my way over to her place. Not surprisingly, coffee and conversation was always better in person.

I began writing this on a Sunday morning with a coffee in hand. And this morning, although it’s not the same, the coffee is particularly good.